On 17 November 2014, the President of the Republic of Slovenia decorated ARNES with the Order of merit for development and research in the field of introducing new information and communications technologies in Slovenia (reasoning). 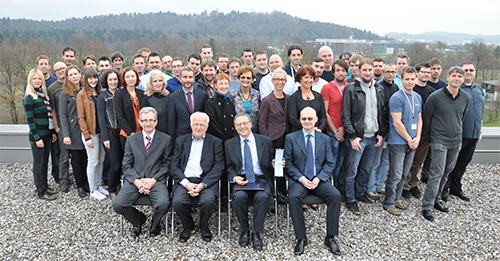 ARNES was established 22 years ago as a national “academic network” and today connects over 1000 organisations with more than 200,000 users in the fields of research, education and culture to the GÉANT international research and educational network. With its network and services, its management of an ISP hub and the .si domain as well as providing security, it is one of the key elements in Slovenia’s e-infrastructure, and ensures the transfer of knowledge when new technologies are introduced.

ARNES’s general manager Marko Bonač, who has led the ARNES institute since its inception, points out that “22 years ago we were real pioneers in the field of ICT and we remain one of the key organisations to ensure the introduction of new network technologies in Slovenia“.

In the years following its establishment in 1992, ARNES assumed a pioneering role: connecting university researchers with their peers abroad and ensuring the Internet’s widespread use in Slovenian schools by providing mass Internet access for pupils, students and teachers. Even before this, Marko Bonač and the legendary Stenar computer participated in Slovenia’s independence – it was this very computer which was used by the IJS to disseminate news about the situation in Slovenia during the war and the country’s isolation. Stenar, which was recently on display at the National Museum of Contemporary History, was also where the first generations of Internet enthusiasts, young and old, got their first taste of this new medium through the 90s.

In the 90s, simple dial-up connections at schools provided a turning-point for communication with their counterparts all over the world – 20 years on, the Academy of Music can stay in tune with its international colleagues through a dedicated optical fibre connection. ARNES’s vision is to use its networks and computing cloud to provide researchers and educators in small towns with access to the highest technology and equal opportunities for collaboration on the advanced international projects available to their peers in Sweden, Switzerland or England. Let us not forget that 4% of the calculations required to prove the existence of the Higgs boson were performed in the relatively small Slovenia.

The in-depth knowledge of technologies and experience that the experts at ARNES have developed in its 22 years of existence has made it a key partner in national informatisation programmes, especially in the field of education. In order to make best use of new technologies it is important to know them well and ARNES therefore devotes significant emphasis on knowledge transfer to users. Of note recently are their endeavours to educate the general public on the Web’s traps, dangers and pitfalls, through the Safe on the internet programme and the SAFE-SI project. When the topic is the development of e-Slovenia, ARNES is an integral part in these discussions.