20 Years of the Internet of People – 2012 ARNES Conference

On Wednesday, 21 March 2012, saw the formal opening by Dr Žiga Turk, Minister of Education, Science, Culture and Sport, of the 2012 ARNES Conference – 20 Years of the Internet of People being held in Kranjska Gora, Slovenia as part of the SIRikt 2012 multi-conference. 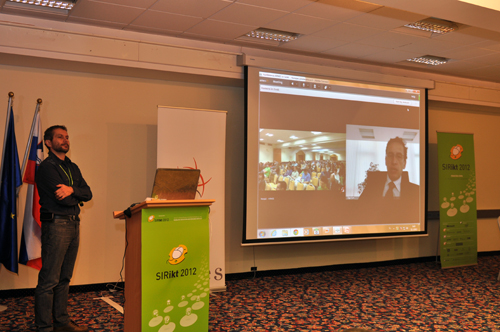 With almost 400 registered delegates from the education, research and culture sectors, the 2012 ARNES Conference is aimed at a wide range of visitors, covering both user and systems aspects of the use of new technologies.

In 2012, ARNES celebrates its 20th anniversary. The last 20 years have witnessed remarkable progress in internet infrastructure and services, with the future promising the “Internet of things”. However, it is people who cooperate ever more readily thanks to this technology, and this cooperation gives rise to the development of ever-better technology. For this reason, we would like to mark the anniversary by recalling that we have been building a network of people, and not just of wires, for 20 years. At this year’s conference, 22 Slovenian and foreign speakers will describe how we initially used the Internet, and what awaits us in future, with particular emphasis given to services that can help us in our work today (conference programme).

We have published pictures from the conference on the ARNES page on Facebook.